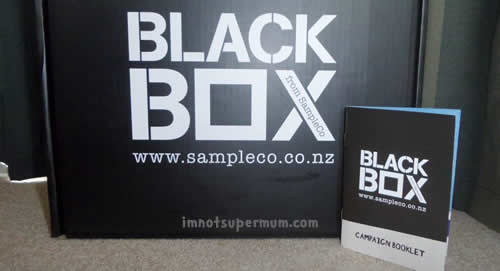 Yay! Another BlackBox – albeit in a brown box this time 😛 Lots of new things to try in this one – Thanks BlackBoxNZ 🙂

Arnott’s Cruskits Light
Not quite a new product for us, as the original Cruskits was another lifesaver with gestational diabetes 🙂 With just two of the crackers and a variety of toppings, I always had something for lunch on had that didn’t make my numbers go sky high. Was also great with a spread of crunchy peanut butter for those days were there was no appetite 🙂 The lite version was no different really, and even the kids enjoyed it. Was great to have on hand for the day I forget to get bread for lunch.. Oops 😛

Now the inclusion of this product was just great timing! Nice one Gregg’s & BlackBox 🙂 Having been Milo drinkers for yonks, the new Milo was a disappointment to say the least! It tastes like you forgot to rinse all the dishwashing liquid out of the cup; not that this happens often of cos. So the opportunity to try something new was great, and it definitely did not disappoint 🙂 Even hubby, who didn’t want to try it at first as it smelt too malty for him, caved in and enjoyed it. Safe to say we will definitely be buying more of this once the pack is gone.

Campbells Stock
Unfortunately, the pack that came in our BlackBox was the beef stock, and as we don’t eat beef at home (hubby eats beef but I don’t cook it at home; but that’s another story) we weren’t able to try this particular one.
However, I do usually buy the Campbells chicken stock & Vege stock, and I absolutely recommend this product. Even just using it to cook rice, instead of water, changes the whole meal 🙂

Mother Earth Fruit Bites
Now I’m not usually a buyer for these fruit treats for kids; I figure why buy the fruit like treats when I can buy fruit. So the big kid was obviously very interested in trying these, and liked them 🙂 I thought they’d be sickly sweet like a lot of the stuff on the market, but it actually wasn’t too bad. Would probably think about getting these as an occasional treat for the lunchbox. Only really big issue was that, as it needed to be foil wrapped, it was really hard for my 4 year old to rip open. Which TBH is kinda good in a way 😛

With the Arnott’s Twisted Faves, we got the salted caramel Monte Carlo’s in the BlackBox. We had tried them in the previous weeks, so knew what to expect. What can I say; they were nice, easier on the teeth than the originals, good flavour; but would I rush out to buy them again? Probably not. Don’t get me wrong, we liked them, but wouldn’t get into my top 5 picks for bikkies (gimme a choc mint biscuit any day!) . Plus I’m so over this salted caramel fad.

Always thought of Healtheries as a supplements company so this was an interesting inclusion for me. Not usually a huge fan of “burger” flavoured stuff, because it tastes too salty for me, but these were good. Both kids enjoyed it, even the 1 year old, with the added bonus of being able to split the bag between them. Have added this to the grocery list 🙂

We’re no strangers to Quality Bakers English Muffins. These are great with a WHOLE variety of toppings. We’ve used them at breakfast with just jam or as a base for eggs benedict, and at lunch or dinner as mini pizza bases. Even the littlest one enjoys them as a snack with a spread of crunchy peanut butter. As this is already on the grocery list, no need to add it 🙂

Sliders have been a fad I really enjoyed. Call me strange, you wouldn’t be the first person , but there’s something about little food that I like 🙂 You can have as little or as many as you want, even trying different things in them at the same meal! Plus, they’re a brilliant size for my 4 year old. Easy to hold with small hands, easier to get into smaller mouth, what’s not to like. The Nature’s Fresh Sliders are also not a roll that’s heavy to eat, and doesn’t seem to sink to the bottom of my stomach like some normal rolls do. Had already seen these under the BlackBoxNZ Facebook page, so had already tried them before receiving this pack, and would add them to future grocery lists.

In our house, fruit juice for the kids is an occasional treat; birthdays, picnics etc. Milk and water are staples here. Yes, aren’t I a mean mum. The Charlies Kids Apple Pouch wasn’t too bad according to the 4 year old, but definitely not his favourite flavour. If we were to try this again, I’d probably try another flavour.

Nom Nom Nom 🙂 With the amount of yoghurt we go through in our household, buying and making the Easiyo yoghurt sachets, is the easiest way to go. We buy the plain yoghurt or Greek yoghurt sachets usually, but some of the new flavours have definitely looked tempting 🙂 I’m not a fan of banana flavoured stuff, wasn’t even as a kid, but the kids and hubby the big kid, enjoyed it. Will be trying other flavours as well 🙂

Thankfully, with 2 under 5 in the house, we have a dishwasher! Otherwise, I’d be washing dishes from morning till night with the dishes we go through. Usually, we buy the powder and the rinse aid, so it was good to try an all-in-one tablet. It did a brilliant job, and we’ll be adding this as an alternative, depending on price of cos, to the shopping list
As per our last box, a great chance to try new things. Can’t wait till our next BlackBox! hint hint BlackBoxNZ

Like the chance to get your own BlackBox? Visit sampleco.co.nz